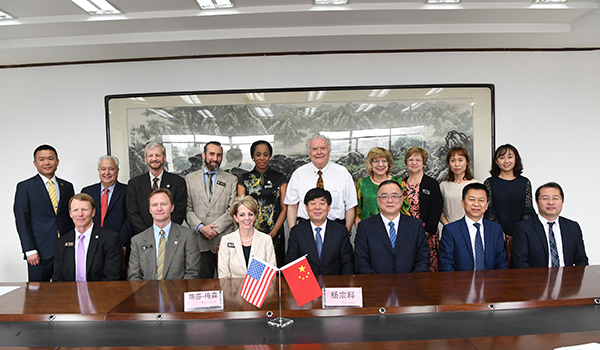 On the morning of May 28, 2018, President Yang Zongke and Vice President Wang Lin of Northwest University of Political Science and Law (NWUPL) met with Ms. Tisa Mason, president of Fort Hays State University, Mr. Jeffrey Briggs and Mr. Michael Barnett, vice-presidents of Fort Hays State University and 9 other people at the Chang’an campus. They exchanged views on deepening the cooperative relationship between the two sides in an all-round way. Presented at the meeting was the director of Office of International Exchange and Cooperation, the dean of the School of International Education, and relevant department heads of NWUPL.

President Yang Zongke expressed his sincere welcome to the delegation and fully affirmed the fruitful cooperation between the two universities in the fields of student and faculty exchange over the past 10 years. He mentioned that FHSU is the most intimate partner of NWUPL, and the two universities have formed a comprehensive, multi-level, pragmatic and efficient cooperative mechanism. By means of the advantages of expanding international educational exchange and the starting point of the Silk Road, as well as the high-quality teaching level of FHSU as an international public university, it is hoped that both universities could deepen the international cooperative model and expand areas of cooperation.

Ms. Mason expressed the great importance that FHSU attaches to strengthening exchanges and cooperation between the two universities, and hoped to further establish more cooperative projects in teaching education and talent training, so as to provide broad international learning opportunities for faculties and students.

After the meeting, the delegation had a full exchange of views with the students of NWUPL who were about to study at the university on the issues of interviewing and living in the United States. On the afternoon of the same day, the delegation visited the MWUPL Museum of History and enjoyed the wonderful performances by the Orchestra, the Folk Orchestra, the Choir and the Han suit Show.