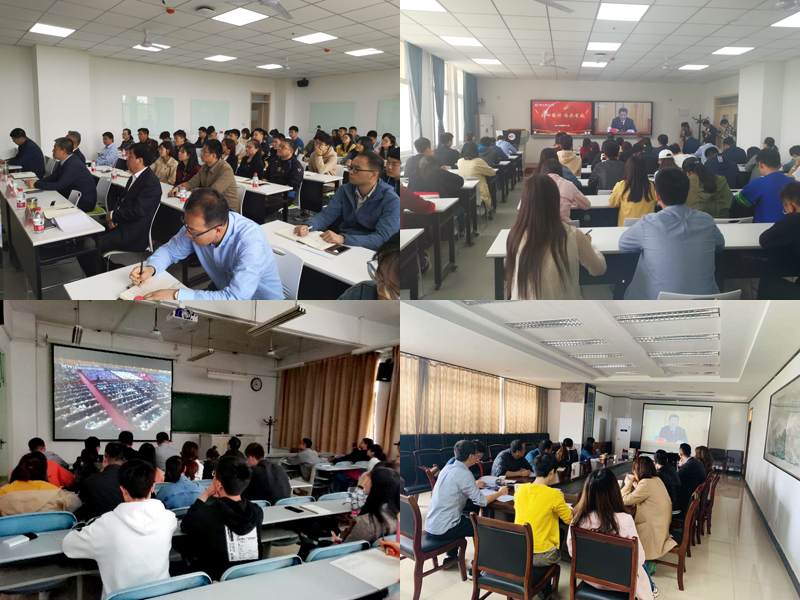 “The last 100 years since the May 4th Movement are 10 decades of successive struggle and triumphant march of Chinese youth generation after generation, as well as five score years of Chinese youth creating a prime China and a blooming nation.” On the morning of April 30, the Meeting to Commemorate the 100th Anniversary of the May 4th Movement was held in the Great Hall of the People. Northwest University of Political Science and Law organizes teachers and students to watch and listen to Xi Jinping, President of the People’s Republic of China, General Secretary of the Central Committee of the Communist Party of China, and Chairman of the Central Military Commission through television, radio and internet. Combining with their own study and work practice, teachers and students express themselves freely and passionately.

In his speech, Xi Jinping pointed out that the May 4th Movement 100 years ago was an epoch-making event in modern Chinese history. This year marks the 100th anniversary of the May 4th Movement and the 70th anniversary of the founding of the People’s Republic of China. At this historic moment of special significance, we gather here solemnly to remember the lofty patriotism and revolutionary spirit of the May 4th Movement pioneers, and to sum up the valuable experience of the Party and the people in exploring the road to national rejuvenation. This will carry forward the May 4th Spirit and inspire the whole Party and the people of all ethnicities, especially the young people of China in the new era, to build a well-off society in an all-round way and accelerate the construction of socialist modernization. It is of great significance for the country to strive for the Chinese dream of the great rejuvenation.

Xi Jinping stated that the youth are the future of the country and of the world. In the new era, the Chinese youth should have their own national sentiments and human concern to carry forward the spirit of the whole world as one community advocated by Chinese culture. They should strive for the realization of the great rejuvenation of the Chinese nation, and strive to promote the construction of “Belt and Road” Initiative and the development of the community of human destiny. He sincerely hopes that in the new era, Chinese youth will actively embrace and strive for the new era, so that youth will glow more brilliantly in their dedication to the motherland, the people, the nation and human kind. 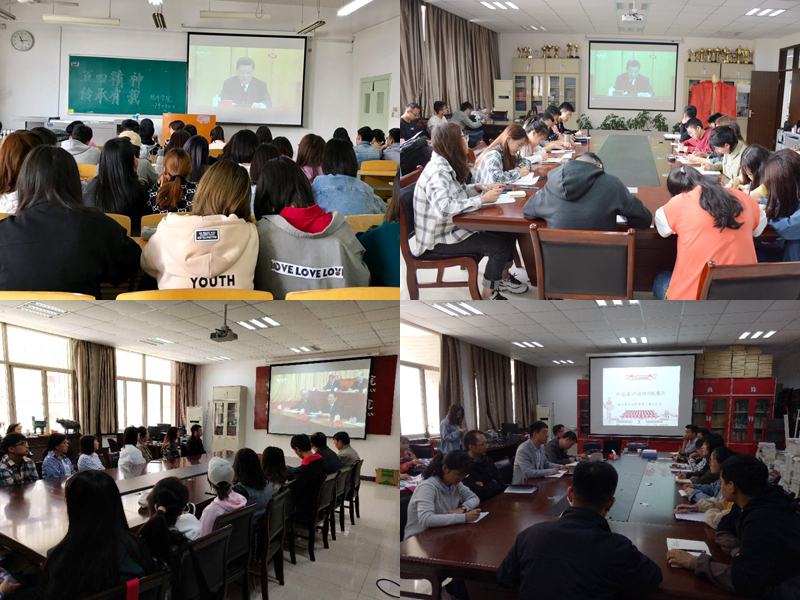 Song Bai, Secretary of the University Youth League Committee, said that General Secretary Xi Jinping’s speech fully embodied the Party’s concern for youth and earnest expectation for the work of the Communist Youth League. It profoundly clarified the pattern of contemporary youth growth and illuminate a significant way to carry out youth work. We deeply understand the responsibility and mission of the Communist Youth League in universities. In future work, taking the spirit of Xi’s speech as our guide and closely focusing on the fundamental task of “building up talent with moral integrity”, we shall earnestly play the role of bridging the Party and the youth, serve the youth to grow and progress, and unite and lead the students to inherit the finest tradition of former Yan’an University. The youth will be guided to take over the baton, put in outstanding performances and become the dream-realizer in the new era by following the Party unswervingly.

After watching the live broadcast of the conference, Professor Bi Yali from School of Political and Public Administration expressed that the contemporary significance of the May 4th Movement was to encourage young people to form a more dynamic way of thinking. It was not only a historical event, but also represents spiritual inheritance. It is hoped that students can study beyond the classroom in the future, care about the fate of the country and community, and better inherit and carry forward the spirit of the May 4th Movement. 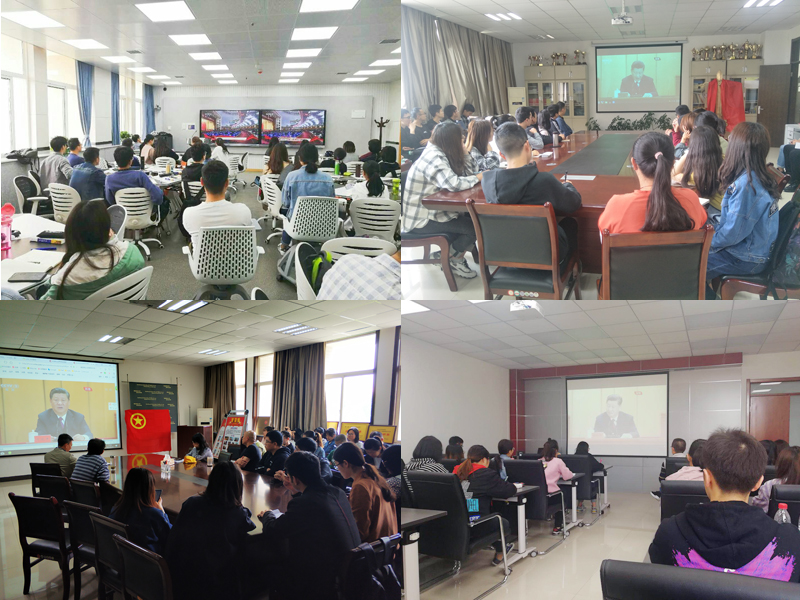 Fang Ning, tutor of School of Philosophy and Social Development, said, “The May 4th Movement is a remarkable page in modern Chinese history. This anti-imperialist and anti-feudal movement with patriotism as its core inspires the awakened youth to accept Marxism and take the lead in striving for national independence. At present, we are in the best period of development. We should continue to carry forward the spirit of the May 4th Movement with patriotism as its core, set up lofty ideals and dare to shoulder the heavy responsibilities of the times”.

Shen Nianggan, a 2018 undergraduate from School of Civil and Commercial Law, turned on his computer in his dormitory and watched the conference with his roommates. Having listened to the speech of the General Secretary, he said with special pride: “At the 100th anniversary of the May 4th Movement and the 70th anniversary of the founding of the People’s Republic of China, the young should hold the great banner of patriotism and adhere to the right path of Chinese youth movement in the new era to forging ahead with the original aspiration and to write the new chapter of the times with great passion”. 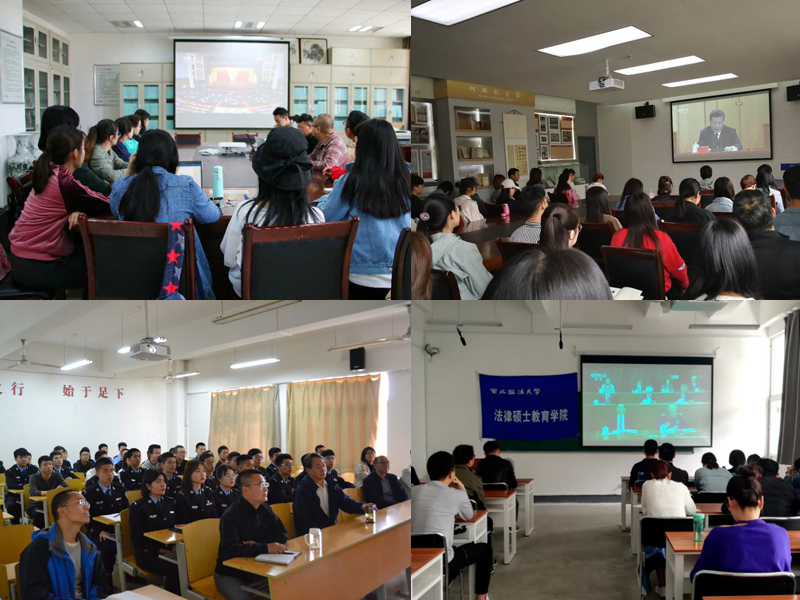 More than 1000 teachers and students spontaneously or collectively watched the 100th anniversary of the May 4th Movement in the real time. The May 4th Movement set a spiritual tone for Chinese youth. From the age of “stormy and gloomy motherland”, generations of young people struggled to hand in perfect answers for their lives. In the new era of socialism, students will continue to study and understand the spirit of the May 4th Movement, and make greater contributions to the realization of the “two hundred years” goal and the great rejuvenation of the Chinese nation with continuous innovation, full responsibility and youthful vigor.