On August 30, the 2019 World Artificial Intelligence Conference Youth Forum on Rule of Law, sponsored by Shanghai Law Society and Shanghai University of Political Science and Law, was held in Shanghai by the School of Artificial Intelligence Law of Shanghai University of Political Science and Law and the Chinese International Judicial Exchange and Cooperation Training Base of Shanghai Cooperation Organization. Vice-President Qi Si, Director of the Department of Education Chen Jingchun, and Professor Guo Hanwen from the School of Civil and Commercial Law attended the meeting at invitation. To avoid the potential risk of developing AI and to meet the needs of the system, rules, standards and procedures in the era of AI, the World AI Conference in 2019 set up a special Youth Forum on Rule of Law. Nearly 300 young college students around the world participated in the discussions and activities to further the governance of AI and the construction of its legal system. The forum aims to enhance the global awareness of the rule of law in AI among young students, better fulfill youth responsibility in the era of AI, and provide a legal path for the development of responsible and reliable AI. 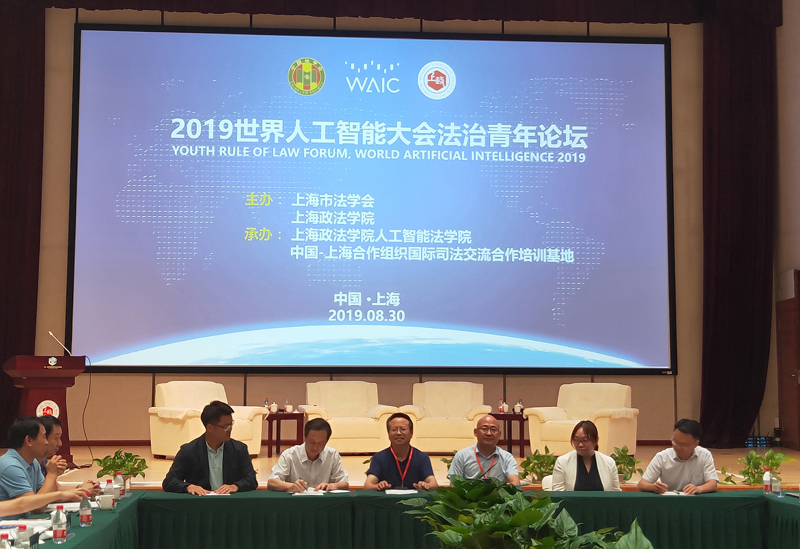 Professor Qi Si presided over the closing ceremony of the forum. He said that the youth, as explorers, developers, users, beneficiaries and managers in the era of artificial intelligence, are the main force in building a community of human destiny, and should shoulder the historical mission of building and defending the community of human destiny. The development of artificial intelligence and the promotion of its rule of law, especially the underlying legal issues, are worthy of further discussions among young students, experts and scholars from all over the world.